Artist Statement
In making art I follow an alchemist’s path. These protoscientists believed in a natural and symbolic unity in the world. Through a combination of common elements they sought impossible results. Similarly, I make sculptures of ordinary objects and events seeking extraordinary results. I see the shapes of trees, the edges of natural and logical phenomena, the flight patterns of birds, their songs and colors, all as structures that encode a deeper communication.
My work is an effort to show physically what I experience. I build structures that seem familiar. I use authentic tree parts that I find eccentric, lovely, sentimental, and exceptional. When speaking of inspiration I think of intuition and structure. 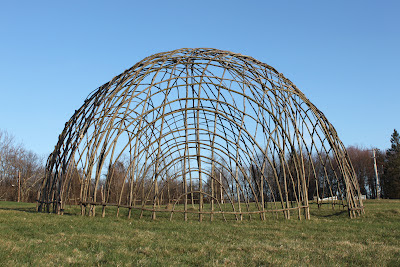 Structure and enclosure.
Shape created by the contained void.
Circles as format. Arches and pattern. 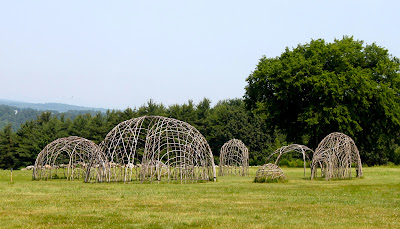 Saplings have little mass, yet in this conglomeration they define a huge space. 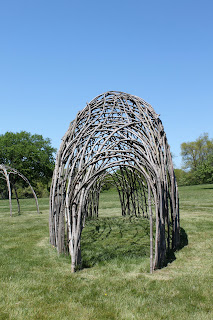 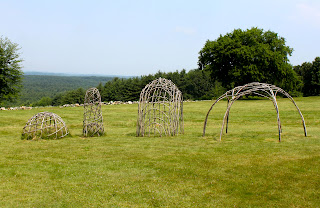 The designs are aligned to engage the landscape and trees about the field. 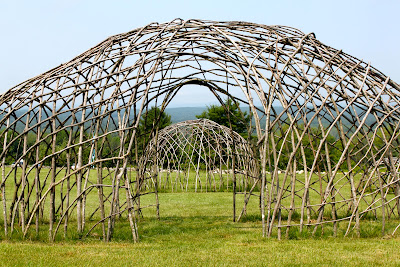 Created at human scale, with abundant entrances,
the viewer is a participant in this alignment activity. 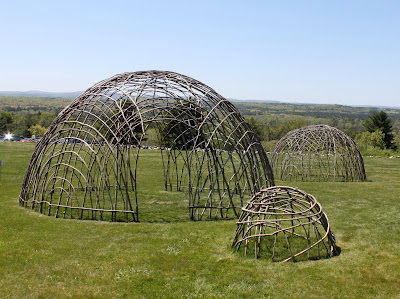 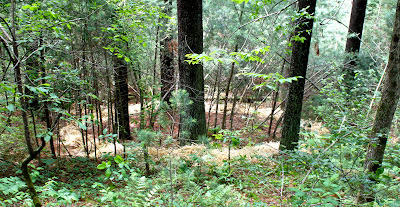 Simple straw circles in deep piney woods.
Indications of my presence, the straw will only mark for a season.
I remember a landscape forever, but forget the people I met there too swiftly. 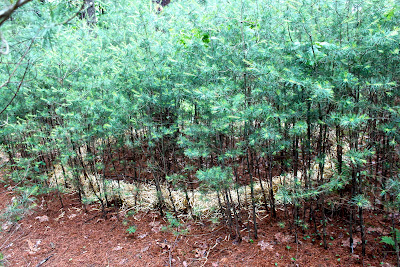 Sweet straw smells linger in my nose -
despite the long day passing - and a shower. 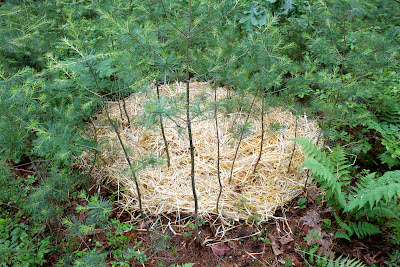 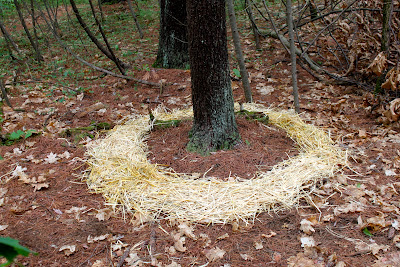 White Pine glade. All angles: vertical trunks, straight limbs, sharp needles - a pattern of sensations. Reds of the dropped needles. Bark dark of the trunks. Rich green of the life needles. The cover beneath a white pine glade is a pattern of sharded light in sunshine - a burnt glow in overcast. 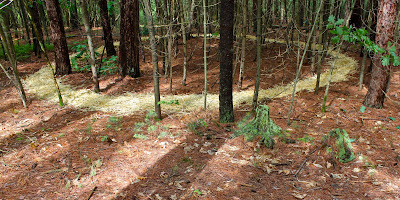 I am drawing within that "ground". My "line" is a shape of straw. Perfect circles that define the silent mood of the piney understory. The yellow straw is needle angular. The sensation is soft. The weight of the foot is padded by pine duff. The straw is an added cushion.
Deeply sensual, it is awake with color and loft. 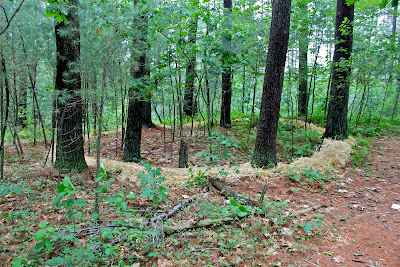 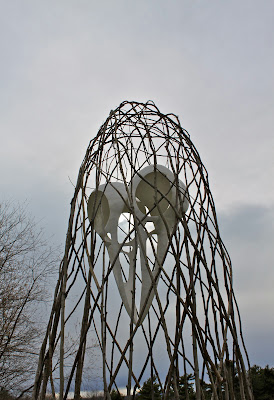 Long ago I collected a raven skull.
Its bleached white is a vivid contrast to the soot black of its vital owner.
Two raven skulls hung in a pair, poised over a grounded pair, beaks to beaks inspire meditation, centering. 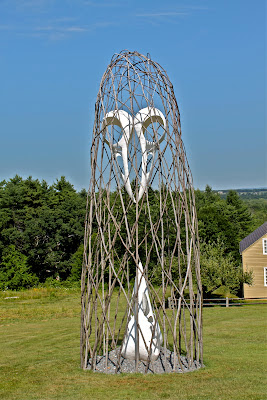 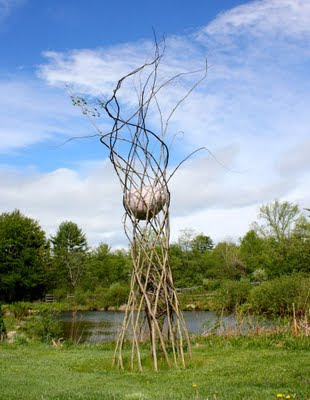 Stones are solid, weighty - inert. My connection to static geology is not that simple. My interpretation of our world is subjective. I am not sure I see stones the same as you do. I am sure you do not feel the same way I do. But that's OK. It makes you interesting to me. 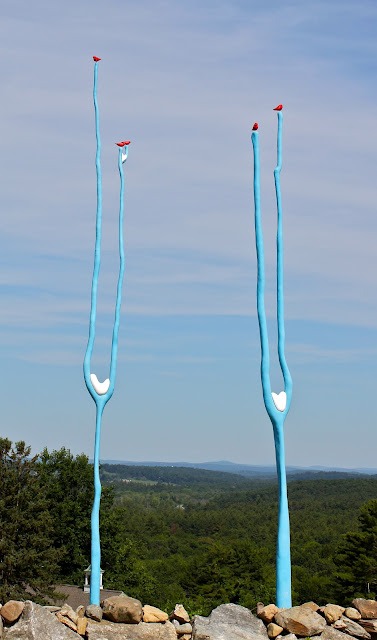 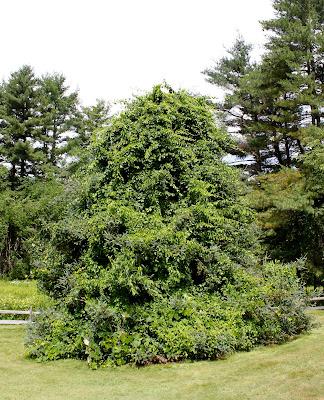 A rather ordinary tree,
encumbered by invasives,
captured my attentions. 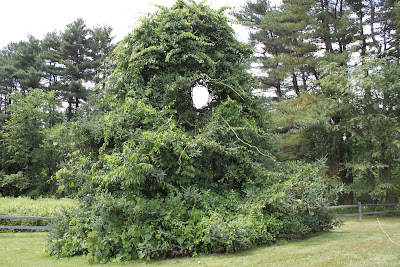 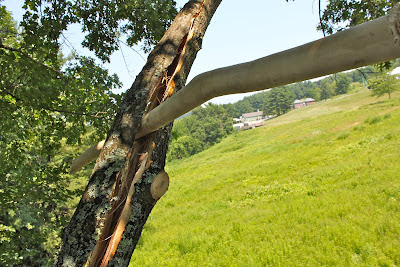 Wind mass exerts unsettling forces upon a mature tree in full leaf, challenging the tree’s core integrity. Mighty oaks express a power of fiber and substance that is both flexible and resolutely impenetrable. Such is the subject: resilient, fortified, structurally impressive. 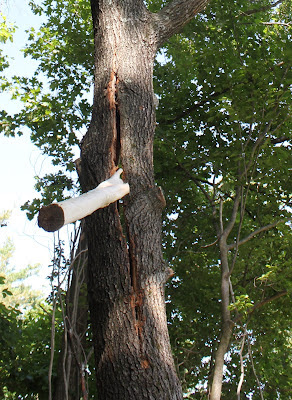 Piercing and splitting this living oak was an act of arrogance. It was a concerted attack. Wedges were beaten in with sledgehammers. Tapered spacers tore fleshy bark and steely wood grain. Progress into the heart of the trunk was earned incrementally. Fibers yielded over time, groaning and snapping long after each new assault. Driven steel against oak hard. Violence in slow motion. Bare logs penetrated the resulting split wound. These shards suspend against the forest canopy and expose evidence of the man/oak confrontation. My will has been expressed. The oak lives on. It has resisted mightily and suffered, but it has not succumbed to the attack. 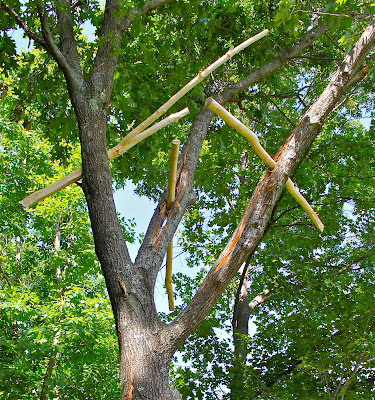 This work is not solely the resulting marks of bare line in greenscape nor is it the performative battle. It is both: that present demarcation, and the experience - expressed simultaneously. INTERSECTION is a defiant challenge to my own physical presence and the legacy of ideas documented. 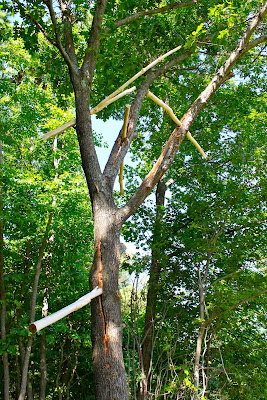 The classic garden at the Ryoanji Temple places an expectation upon the viewer. Patterns of raked gravel surrounding monumental stones present a language of seascape and islands. The ambition of this traditional rock garden is not representational. The design intent is an evocation of place. 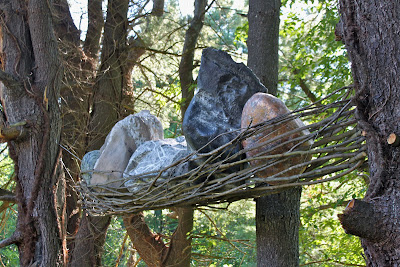 The deep shade of a white pine grove – with its perfect vertical trunks and dappled sunlight – is a stage for this drama of buoyancy. Mass is redefined and belief is suspended as insubstantial sapling boats levitate boulders. The event provokes a visceral response. One’s body calculates the weight and is confounded. The design intent is a provocation of perception. 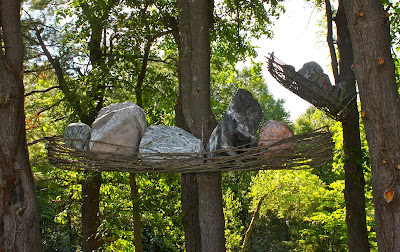 Most boats rely on the surface defined by two medium. They are masters of interface. The boats in ROCK GARDEN TUTORIAL defy media and transform the sensation of solid. They create new symbols and suggest a language that we understand without knowing. These boats, loaded with boulders, transport dreams. Weighty imaginings buoyed preposterously. 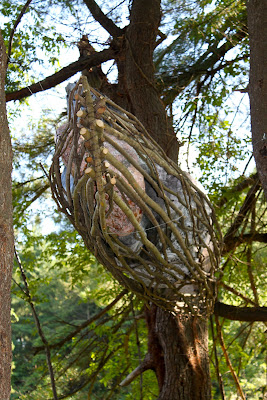 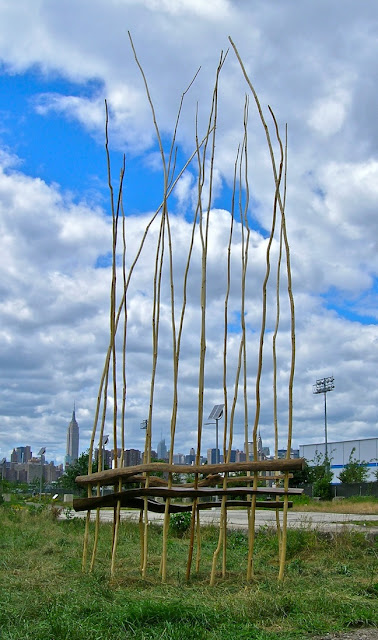 Divining Fault is a story of unknowable forces. Deep fractures and separations. A tree sheared lengthwise suspended in two parts. This golden exposure, these raw wooden lines, are a calligraphic stroke that speaks a message of searching for blame.
sawn beech, saplings